BLS for Cardiac Arrest, Part I

Rogue Medic has been setting MY world on fire for the past couple of years, but his most recent series of posts regarding management of cardiac arrest being a BLS skill has gotten a tremendous reaction. Go read the original post here and then follow it up with the evidence here. Rogue is one of those bloggers whose word is more or less unimpeachable. He never posts anything he isn't prepared to defend, and he has the evidence to back up his contentions. I aspire to someday have as much of a handle on my profession as him.

Likewise, Kelly Grayson has blogged on more than one occasion about EMS' insistence on being dragged into modern medicine, kicking and screaming. Here in Chicago, it's not uncommon to see signs declaring "The Chicago Fire Department: 150 years of tradition unimpeded by progress," and that's an apt description of the current state of EMS in many areas. Change "150" to "40" and you're not far off. In particular, AD's entreaties of our profession to think of ourselves as more than a patch and a skill set are what have led me to the conclusion that paramedicine will never truly evolve as a profession until we are willing to focus less on what we DO and being to embrace and focus on what we KNOW.

Research has proven time and again that the only interventions that have been shown to increase survival to neurologically intact discharge are early CPR and early defibrillation. As Rogue notes, ACLS even acknowledges that the majority of its guidelines have not been proven effective in improving the rate of survival to neurologically intact discharge, yet they continue to include aggressive drug therapy, advanced airway management, and the use of selective cardio-toxins such as Lidocaine and Amiodarone in their guidelines for treatment of cardiac arrest. There is no evidence supporting these treatments, and the AHA even tells you that up front, yet we continue to do these things to patients. At some point, we as a profession need to stand up and embrace evidence-based medicine. Continuing to administer "treatments" to patients that have not been proven to be of benefit is not "treatment" at all, nor medicine, as Rogue points out.

As far as cardiac arrest is concerned, our protocols will tell us to do many different things, sometimes entirely different courses of "treatment," depending on what we see on the monitor, but only high-quality CPR and early defibrillation have actually been proven effective in increasing the only statistic that matters, which is survival to neurologically intact discharge. In fact, the high doses of epinepherine we administer may in fact be doing more damage, particularly in the case of cardiac arrest due to AMI, which is probably the most common cause of cardiac arrest. The use of those selective cardiotoxins can cause stable dysrhythmiass to deteriorate into unstable dysrhythmias. As Rogue quite rightly pointed out, we can't just go along with what our protocols tell us to do, and we can't even stop short at integrating local protocol with AHA guidelines with what we know will work. We as a profession cannot possibly expect to be taken seriously if we don't begin to advocate for what is best for the PATIENT based on solid, verifiable evidence.

In my response to Rogue's post, I commented on the need for Paramedics, as a professional group, to begin to integrate our protocols (which oftentimes dictate what we MUST do) with what the research and the evidence have shown we SHOULD do. My position was that everybody has their protocols, we all have to follow them, and that supersedes everything else, including our mothers, but that we should find ways to integrate what our protocols tell us we MUST do with what the research tells us we SHOULD do. That's no longer my position.

My position is now that we, as a profession, need to begin advocating for protocols that are in line with research, rather than in line with ACLS guidelines, or in line with tradition, or that are in line with theory. We need more evidence-based medicine in paramedicine. In responding to Rogue's post, I unknowingly painted myself into a corner, equivocating on the evidence while continuing to hide behind my protocols as a reason to abuse patients. I need to begin bringing this evidence to the attention of my medical director, and trying to convince him that we shouldn't doing things that haven't been proven to work.

Much of EMS over the years was based on logic and assumption rather than evidence. When my dad became a paramedic, first-line interventions for cardiac arrest included pushing two amps of bicarb and three stacked defibrillations prior to beginning CPR. This is laughable now, but what we are currently doing may be laughable in the future. Let's get off this train and begin thinking about things rather than blindly following our SMOs as though we are monkeys trained to push a button when a light flashes.

We need to use the evidence to convince our medical directors to allow us to stop abusing patients with "treatments" that don't work and "medicine" that may be more harmful than nothing at all.

To be continued, as Rogue says... and many thanks to him for inspiring this kind of thought.
Posted by Windy City Medic at 19:03 No comments:

Probie To Practitioner wrote today about having been in a funk and how she writes lists of things to be happy about. Go read it  and see what you think. I commented with a few things I'm happy about, and before I knew it, I had a list of my own. So here's a list of my own.

1. When your dog crawls up beside you on the couch and curls herself up as close to you as she can and falls asleep with her head resting on your leg.
2. The smell of a meatloaf baking in the oven on a cold day.
3. The look on my wife’s face when she walks in after a hard day at work and smells the above meatloaf's aroma in the air and thanks me for being such a good “house husband.”
4. Getting into bed that's been freshly-made with clean sheets.
5. Christmas lights all over the neighborhood.
6. Coffee, and the ritual of making it… grinding sumatra beans, measuring and pouring water, the fragrance permeating the kitchen while you peer through frosty windows at the first glimpses of sun peeking above the horizon.
7. The satisfaction of changing the oil in your car, knowing that you did for $12.99 what Jiffy Lube charges $40 for.
8. Having a conversation with a friend where you both feel as though you TRULY understand each other.
9. Your own "personal" hidden stash of the angiocaths you like... so it's no big deal when your ambulance has been re-stocked with those God-forsaken harpoons with the spring-loaded push-button thing.
10. A dual-zone heated mattress pad, so the wife who's always cold can turn her side up to twenty while the husband who's always hot can turn it on to one just long enough to take the chill out of the sheets.
11. A dog who sleeps late.
12. Being at the age where I genuinely enjoy my parents' company and look at them as friends, rather than parents trying to cramp my style.
13. Having hit the in-law jackpot. My wife's parents are pretty awesome.
14. Having a brother, sister, and father who are all Paramedics, so if I have a question or need advice, I always have someone to talk to, no matter how trivial the problem may seem.
15. Puppy kisses. Can you tell I like my dogs?
16. Getting assigned to a rig that has both arm rests AND cup holders!
17. Oatmeal.
18. Your favorite song on the radio, and the thoughts of your friend, of whom this song always makes you think.
19. Sitting on the radiator. Even better, putting your towel on the radiator while you shower.
20. Waking up this morning. In our line of work, we see a lot of people who DIDN'T wake up... every time I do, I consider it a win.

Thanks for the inspiration, P2P.
Posted by Windy City Medic at 21:42 2 comments:

I'm a life-long Chicagoan, life-long South-sider, and a life-long Cub fan. I come from a family of Paramedics. When I was a little kid, I thought that being a Paramedic was the coolest thing one could possibly do with one's life, because my Dad was the coolest person I knew and that was what HE did. Apparently I wasn't the only one who thought it was pretty cool. My sister and brother are also Paramedics, along with numerous other members of my extended family.

Dad used to tell stories around the dinner table that would have us rolling on the floor in laughter. If you could get my dad and my uncles, also Paramedics, into the same room together, they'd play off of one another like the most experienced comedy trio you've ever seen. They worked together in the early days of EMS in Northern Illinois. They saw a lot of things.

As I got older, the funnier stories were gradually interspersed with the more serious ones. Once I had reached adulthood, I had spent many a night running errands with my father, who by then had moved into administration, him relating war stories from his "time on the street" that focused less on the humorous and more on the deadly serious while I listened in rapt fascination. I don't think Dad was trying to scare me or anything, he just seemed to know that it was appropriate for him to begin sharing the bad along with the good.

Although I had wanted to follow in my father's footsteps since kindergarten, I somehow found myself toiling in the aviation industry for nine years, having brainwashed myself into believing I was happy as a baggage handler. My wife helped me realize just how miserable I was, and with her support, I made my way into EMS. I hope I can be as good of a Paramedic as my sister, brother, and father are. They're my inspiration.

Now it's my turn to share some stories, but as my wife has no particular tolerance for the blood and gore and guts, and my siblings and father have seen it all, and the only kids I have have four legs and eat out of bowls on the floor, I have decided to make my way into blogging. I've been inspired to do so by reading the works of Kelly Grayson,, Justin Schorr (The Happy Medic), Michael Morse (Rescuing Providence), Tom Bouthillet (EMS 12-Lead), Captain Chair Confessions, Rogue Medic, and others. I don't know why I'm identifying each of them so formally. Chances are great that if you're reading this, it's because you read those blogs already. I hope I can live up to their standard, as they've set the bar awfully high.

I hope you'll enjoy what you read here.
Posted by Windy City Medic at 21:58 4 comments: 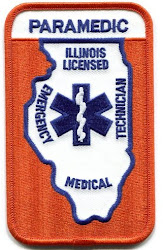 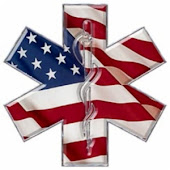 Windy City Medic
Chicago, Illinois
From a family of Paramedics, I'm trying to live up to my legacy and do my family proud.